Switching Gears and someone new.

I finished up the border on my Disappearing Ninepatch; it is now a Flimsy. It is down from the design wall and ready to layer up when I get the backing.

I don't have a way right now to get a photo of the whole Flimsy. So here are two shots of one of the corners. 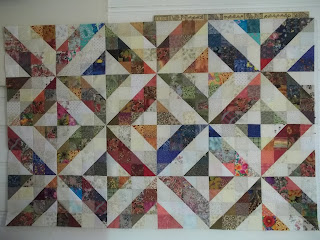 I pulled out the basket of stuff for this quilt that I put away in February 2015 when I started to work on the wedding gift quilt.   I wanted something to work on until I got the backing for the Disappearing Ninepatch. I need to make 12 more blocks, 6 each, for rows at the top and bottom as shown here, (photo is oriented 90 degrees) the rows will really be on the right and left sides. As I am typing this I am wondering if maybe I will then need more blocks so the quilt will not be square. Hmm, maybe not, would that require another 12 blocks in order to complete the pattern?  When I pulled this out to work on I thought it would be a quick finish because I have a lot of HST's. However, I don't have a lot that are both light and dark values and not many that I like very much. I cut a lot of squares and sewed a lot of HST's of which most of them need to be squared up to 3 1/2 inches. 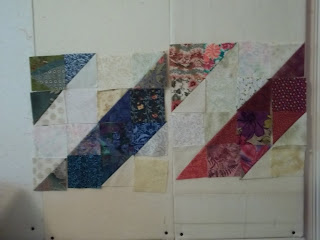 So far, this is all I have up on my wall and I am not finished with either of these yet; they need tweaking.

I really don't want to set this aside again but I am not sure I want to make more than 12 more blocks. We'll see!


In the meantime I have another diversion. her name is Lucy. 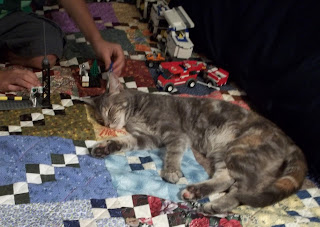 After Mona was gone my daughter said we wouldn't get another cat.  Well.......... on Thursday she said if I really wanted a cat to take care of, there was an abandoned kitten in the park that had been there for a week following her whenever she was there walking.

So here she is on her first day with us, not a little kitten but more like middle school age. She explored the whole house with 3 boys and a dog following her every step. She had something to eat, and chose a bed where the boys were playing with Lego's and fell asleep for hours. She ate again, drank some water used the litter box and slept some more.
She slept a lot for the first three days; I think she was exhausted from being out alone.  The short times she was awake, she became acquainted with the dog, who is very interested in her and very non threatening, played with her 4 jingle bell balls, 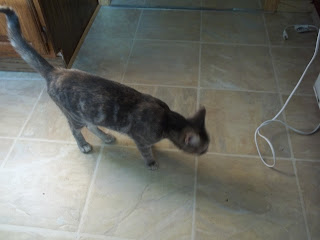 Today, she has been up and around and is interested in everything and  purrs all the time.


She responds to NO! That leads me to believe she is an unusual amazing cat. I would have named her (amazing) Grace but we have a great granddaughter Grace so I went with Lucy which is what the boys thought we should name her. 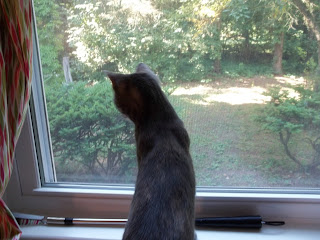 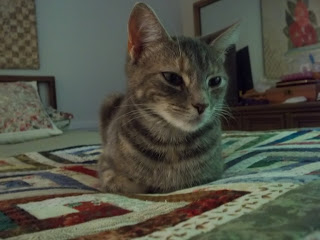 She likes to look out the windows.  We have chipmunks and birds at the feeder to entertain her.


She also likes to lay on our bed and I think maybe she she thinks she has the mistaken idea she is going to sleep with us. So far there have only been brief visits. She is either testing us or checking up to see if we are still around.

She follows me around when she is awake and not looking out the window. Could it be because I made sure I was the first one to give her kitty treats?

She is a very nice, calm, friendly cat and I wonder if someone is missing her. I can;t imagine anyone dumping her in the woods. If no one claims her, I think maybe she is going to let me be her person.
Posted by Ruth at 6:38 PM 1 comment:

I have been struggling with a 4 x 4 foot design "wall" for a while. There have been reasons why I never really got what I wanted. There are 2 walls that could be used but my furniture arrangement didn't leave any wall space to use.  When you have things that worked in one space they do not always fit into another same size space that has windows and doors in a different configuration. I had also brought some things in to my sewing room that were not in my previous sewing room. Those additions are things I need for storage for things that are not sewing related but the sewing room is the only place they can go. Over time, we moved furniture around and put up shelves  and hung some "design boards" and on a few occasions I improvised when I needed a larger design wall. Every time I made something that didn't fit on the wall I used our bed as a design space. We talked about what to do but it is hard to know what to do when you don't know what you want.

Yesterday we bought some insulation board and I covered it with flannel. Jack put them up beside and below my 4 x 4 feet "wall" and my design wall grew to 75 inches by 62 inches. Well, almost....... I still have one section that will go below the new part on the right. 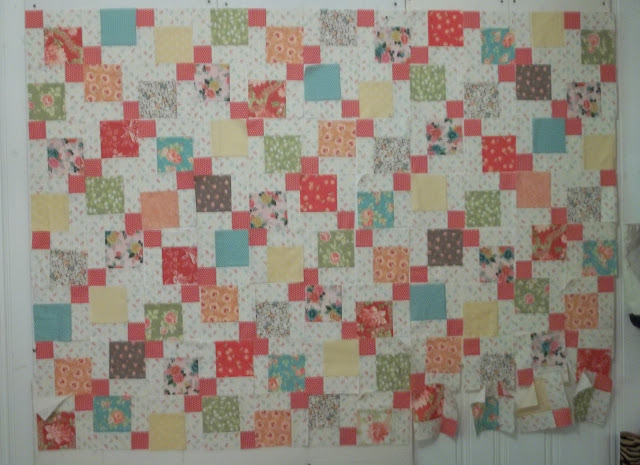 I was able to put all my DNP blocks up on the wall (there are 4 blocks on the bottom right that are pinned to the ones above). This is probably as large a wall that I will ever need when I get the other board covered and up on the wall.

I think my space has evolved to where it will function well. I have everything I need in places that are easy for me to work in. I like it!

The ladies I have been quilting with are working on Disappearing Ninepatches. I have made several DNP quilts over the past few years but it is new to the other ladies. It is a nice easy pattern and it works up fast and looks like a lot more work than it is. There are also so many variations that the quilts don't all look like the same pattern. 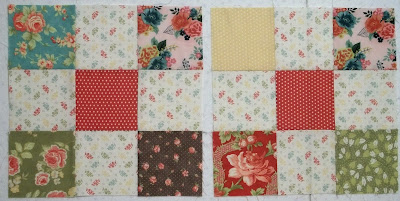 These are two of the original nine patch blocks. I made 19 of these. The red dots and the white background prints are the 2 "constants" in all the blocks. When I put the blocks together I mixed up the corners instead of making them all the same. I wanted to make sure I that I used some of all the fabrics. I knew I would not have enough of the light background if I miscalculated what I would need from each of the corner prints. 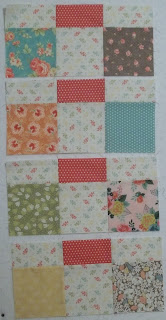 I had to make 6 half nine patch blocks because I didn't have enough of the light fabric to cut enough 5 inch squares. I thought I would have to get more fabric but from each 5" strip there was a leftover piece that was big enough to cut a 2 1/2 inch rectangle.

I bought a bundle of Moda fabrics ("Strawberry Fields" by Figtree) when I was shopping for a yellow fabric to use in place mats that I was making. When I decided to use the bundle in the DNP I went back and bought yardage of 2 of the fabrics in the bundle to use as the "constants" in all of the blocks. Anymore, it is a big deal for me to get out to the quilt shop so when I get there I always have to look around and make sure I do not miss something that I can't live without. I found another bundle of fabrics "Farmhouse" by Figtree that works perfectly with "Strawberry Fields". I had some leftovers of "Fresh Cut" from the wedding gift quilt that I made last year; they work well too. All together they make a nice variety.

These are blocks that that I have cut from the ninepatches. I am not sure yet how I will  lay them out. I have worked out a layout in EQ but I will make my decision when they are up on the wall. 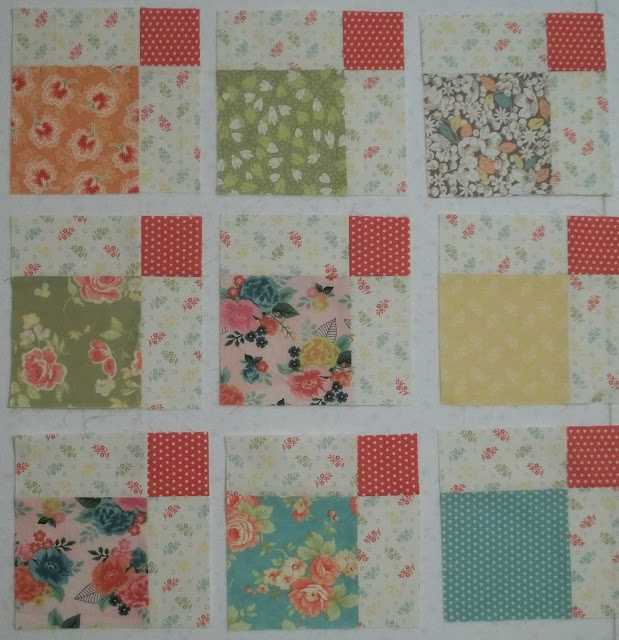 Today when I get together with the other ladies I will cut the 9 patch blocks in quarters and square them all up to the same size.
Posted by Ruth at 7:45 AM No comments: