Here it is more than a month after my last post and nothing to show for it. The waterproofing project in the basement is finished and all of the necessary equipment is back in place. The next stage of the basement project I think will be the flooring. After that there will be walls to build to separate the space for rooms. I have no idea how long this will all take, no one tells me anything.

In the meantime, my sewing room is not user friendly: it is not exactly a disaster but there is just too much stuff. However, I did a little bit of sewing even though is is not easy.  I have been going through everything that we bought along when we moved and I have been purging. I had some things that the great grand kids used to play with and many games went to someone who would enjoy them. I have a doll bed that I am giving away as it has been a long time since anyone played with it. I am keeping the little quilt I made for it because it has blocks from my great grand daughter's baby quilt. So I needed a quick quilt to go with the bed. 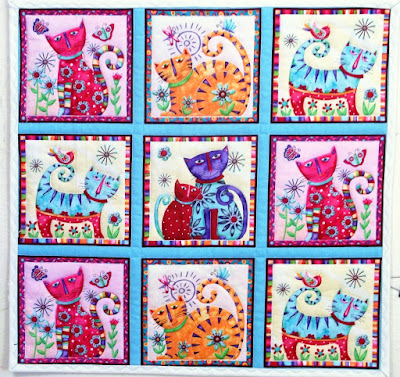 I cut a 9  motif square from a piece I bought at a quilt show and layered it up with some fabric I had left from another project.

I quilted around the kitties and around the "frames" and used some Kona Bone for the binding. 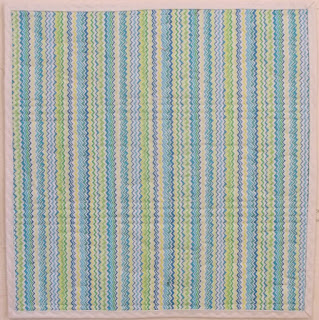 I sewed the binding to the front, turned it to the back and fused it before I stitched the binding on the machine. It doesn't show in the photo but I used the number 4 Bernina stitch using  turquoise thread. It is a bright little quilt that went fast and there is no more mess in my sewing room than there was before I started. That is not to say the room is in any kind of order but I feel better for the small accomplishment.

Tomorrow I plan to give the bed and bedding to my friend. After that, I will deliver 2 shopping bags of non quilting fabric to Goodwill. I have bagged everything up in large Ziplocks with fiber content and yardage. That will be another small accomplishment.
Posted by Ruth at 3:35 PM 2 comments: Links to this post