I have been keeping busy. One of the things about slowing down with age is that it takes longer to do things and you don't have so much time to be bored. 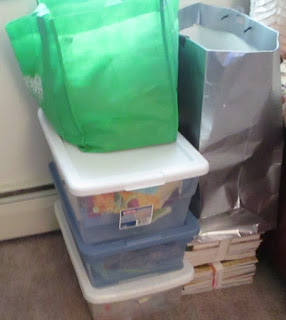 My pile of things that are being passed on doesn't look so large but those three boxes will all come back empty. the big gray shopping bag is 3/4 full and it is packed in there pretty full.


I  stopped sorting things because what I am purging is not going anywhere soon. The mess  made with sorting was overwhelming so I put some things away and moved things around so I will be able to pickup sorting where I left off without going back to square one.  I can also work at my desk without losing things in the mess. 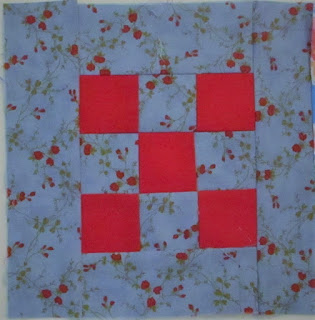 I can do some sewing, nothing big but a little here and there.

When I started putting things away,  I found a few things to sew and cut that would probable get lost in the shuffle otherwise.
This framed 9 patch  only needed one 8 inch strip sewed on the side. It would have gone into the quilt I finished but I needed that 8 inch strip and I couldn't find it at the time. 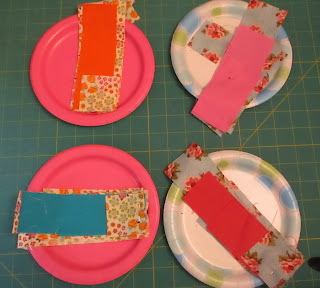 I had some 2 inch print and solid strips put aside for Framed nine patch blocks. They were ready to cut into the lengths  needed. I cut them and put each block on a paper plate  and they are ready to sew. I copied this idea from Julie Sefton who certainly has to be well organized to accomplish all that she does.

I may cut for some more blocks and stack up a bunch  of plates and then I can work on a few at a time. I never seem to have big chunks of time anymore so that might work out well.

Jack has finished his radiation treatments and everything went well. He did not experience any of the side effects he might have. We were concerned about going down to Cleveland Clinic during this time but after the first day I felt much less concern. Everyone entering the building was screened, only one person was allowed to go with the patient, anyone with a cough was given a mask if they did not already have one, our temperatures were taken and we were given a wrist band to show we had been screened. The Taussig Cancer center is a new building and you enter and go straight to the elevator and down one floor directly to the check in area for radiation, almost no contact before the sign in. There is a very short wait time and the waiting room was large so everyone waiting was spread out.  Many of the patients coming there are  immunocompromised so they are really set up for that already. Nevertheless, we are relieved that we are finished with the every other day trips down there. In three months Jack will have a follow up CT scan.

We have changed the way we do a lot of things because of covid 19. I had been going to the grocery store almost every day for fresh produce or bread or milk or vanilla ice cream. Then I cut back on my trips to the store and yesterday I placed a rather large order and had it delivered; it was here in about 2 hours. I didn't get everything I ordered as they were out of a few things and I got Natural peanut butter (with the oil on top) instead of Jif (jack's favorite snack with cinnamon raisin bread). I think my daughter likes that kind so she can have it. I can't say it saved me any time because it took me a long time to make out my order but maybe next time I will be faster. I think next time I will order on line and get curbside pick up. Although, I might get used to having my large orders delivered as it was pretty nice not to have to load it in the car and then unload it and bring it in. Of course I still have to put everything away.

Life goes on and we are doing all the things we are supposed to do. I am counting my blessings and there are many. I am grateful and thanking God for all the technology that makes life easier, for all the people who are in harms way working to keep us safe and cared for and supplied with necessities. I  am praying for them all.

Almost everyday Terry and I talk about the fact that our minds move faster than our bodies, lol. We too are sorting and gifting, but we are prepping to move across country if our country ever switches from neutral to drive.

Glad your husband didn't have side effects from the treatments. They can be brutal.

good to hear that you are doing ok and maybe can get a bit of sewing done.